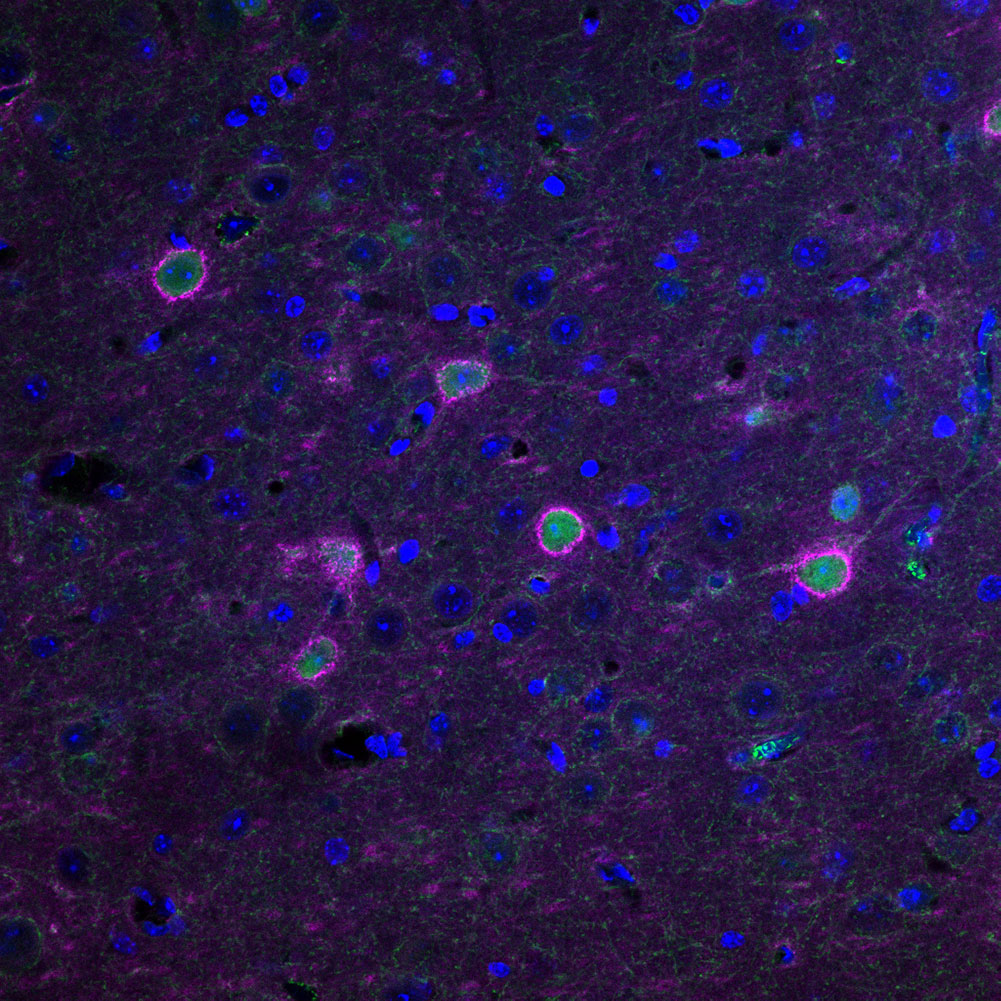 CHEMOGENETICS RESCUES THE HEALTH OF PERINEURONAL NETS IN PINK THAT SURROUNDS NEURONS IN GREEN IN THE ALS MOUSE BRAIN. A team of researchers led by scientists at the University of Toronto has delayed the onset of amyotrophic lateral sclerosis in mice. They are cautiously optimistic that the result, combined with other clinical advances, points to a potential treatment for ALS in humans.

Commonly known as Lou Gehrig’s disease, ALS is caused by the degeneration and loss of neurons that control muscles. There is no cure for ALS which currently affects between 2,500 and 3,000 Canadians.

“Our experiment profoundly delayed the disease by preventing the degeneration of neurons in the cortex of the brain,” says Melanie Woodin, a professor in the Department of Cell & Systems Biology (CSB) at U of T and a co-author of a study published recently in Brain.

“It delayed typical symptoms of ALS like the deterioration of motor skills and weight loss. It also increased the survival rate.”

The result was achieved in mice that possessed the same gene mutation (SOD1) found in some human ALS patients. The researchers targeted neurons in the motor cortex — the region of the brain that controls muscles — with an engineered protein designed to correct an imbalance in neurons referred to as hyperexcitability.

“Neurons communicate with each other through synaptic transmission, which involves both the release of chemical neurotransmitters and electrical activity” explains Woodin.
“This communication can be either excitatory or inhibitory. Excitation is like the gas pedal in your car and inhibition is the brake pedal. Too much gas and you’ll speed off the road; too much brake and you don’t go anywhere. So, to drive properly, you need a balance between the two.”

In a healthy brain, a balance between excitation and inhibition ensures proper brain function — enabling us to solve math problems, retrieve memories and feel emotion. But too much excitation in the brain’s neurons can lead to neurological disorders like seizures, epilepsy, neuropathic pain, autism spectrum disorders, schizophrenia and ALS.

While human SOD1 gene mutation carriers display pronounced cortical hyperexcitability in the decade prior to the onset of ALS, it wasn’t clear it was a cause of neuronal degeneration. “We knew before that there was a very profound imbalance between excitation and inhibition in the region of the brain that controls movement,” says Woodin. “But that didn't tell us whether this hyperexcitability caused the onset of symptoms.”

“Now we know,” says Woodin. “That in ALS mice with the SOD1 mutation, hyperexcitability in the motor cortex is causal to the onset of the disease.”

“The result is important because it points down a path for a potential treatment in humans,” says Woodin, who is also the Dean of U of T's Faculty of Arts & Science.

The optimism that the result could eventually lead to a treatment in humans is bolstered by the fact that it comprises advances which have yet to be used together but that are proven on their own.

Woodin and her colleagues are combining advances in viral technology with a revolutionary technique in neuroscience called chemogenetics. Proteins that had their structure altered were introduced into mice via a virus and delivered to neurons in the primary motor cortex.

“The clozapine discovery was a game-changer for our work,” says Woodin. “It revealed a clear path for clinical translation which just wasn’t there when we first developed our hypothesis.”

And while chemogenetics was employed in the current study, it isn’t currently used in human patients in part because of the challenge in delivering the chemogenetic “tool” to the right neurons.

But an innovation being pioneered for human use by Dr. Lorne Zinman and Dr. Agessandro Abrahao offers a promising alternative.

Zinman is a co-author on the paper, runs the ALS clinic at Sunnybrook Health Sciences Centre and is an associate professor at the University of Toronto’s Faculty of Medicine.

Abrahao is an assistant professor in the Department of Medicine at U of T and an associate scientist at Sunnybrook.

Zinman and Abrahao are testing a non-invasive procedure to deliver therapeutic agents to the motor cortex of ALS patients. The brain is protected by a natural barrier that keeps out pathogens like bacteria and viruses — but that also keeps out therapeutics like drugs and proteins. With the new technique, the blood brain barrier can be temporarily and safely opened to deliver a protein to targeted regions of the brain.

“This advancement in decreasing cortical hyperexcitability has the potential to have a major impact on treating ALS in humans,” says Zinman. “Much more work is needed but this advance shows great promise toward a path to stopping this disease.”

Additional co-authors on the study include researchers at CSB, the Department of Psychology, the Institute of Medical Science and the Tanz Centre for Research in Neurodegenerative Diseases at U of T (including Prof. Janice Robertson, James Hunter Family Chair in ALS Research), as well as Laval University and the Sunnybrook Health Sciences Centre. The research was supported by funding from the ALS Canada Research Program, in partnership with Brain Canada (through the Canada Brain Research Fund, with support from Health Canada). Additional funding was provided by Medicine by Design and the Natural Sciences and Engineering Research Council of Canada.